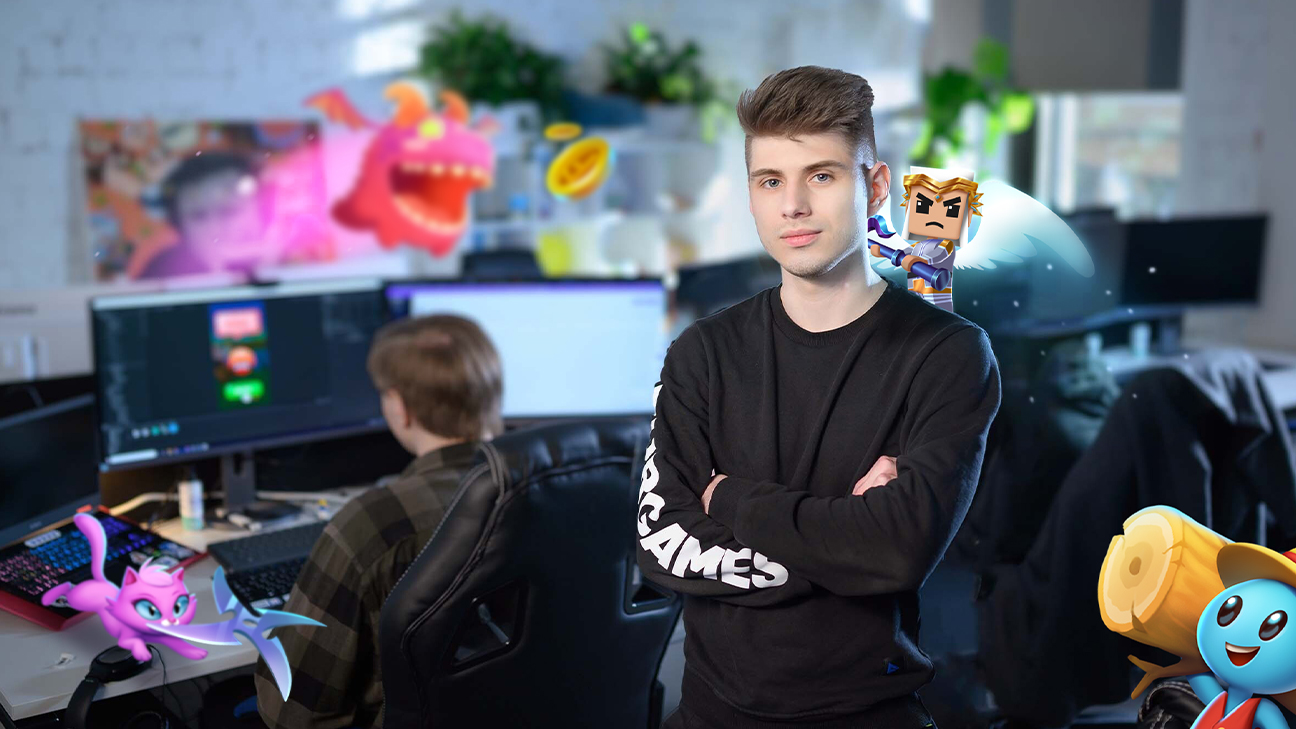 Programmers have several specializations in game development, but we don’t know much about developers in marketing departments. What is Marketing Unity Developer responsible for? What skills are especially important there? What is the difference between a developer’s work in a product team and marketing? Ruslan Voloshin, Head of Marketing Development at Azur Games, will tell us about these things.

— Let’s start with the basics. What does Unity Developer do in the marketing team?

Unity Developer in the Marketing Production Department is responsible for three areas.

The first is modernizing existing projects. At Azur Games, our colleagues, promo artists and motion designers, also work with Unity — they record gameplay to make ad creatives. We help them to make changes to the project code so we could achieve certain results: add new mechanics, change visuals or models.

For example, a creative producer has an idea to recreate a shootout at a waterfall in a promo video. There’s no such location in the game itself, so we make it almost from scratch: arrange characters, adjust colors, add logic if it’s not provided for in the game project. Once it’s all approved, we hand over the game build to motion designers. Often such creatives perform great — they hit the tops on advertising platforms. Sometimes it even happens that a developer sees the creative’s success and transfers our scenes to his game.

Third, we are responsible for global Unity support in the entire department. The Marketing Production team consists of more than 100 people. Our task is not only to help them with the Unity engine but also to keep game projects up to date. Now, there are about 250 game titles in the marketing repository. Mainly they refer to the hypercasual genre, and here updates for each game are released quite often. That’s why we should always have the projects’ latest versions so that guys make creatives and playable ads with actual game builds.

— You were the first developer in the marketing team. Tell us, how did your development department change?

I was really the first one to take the Marketing Unity Developer position at Azur Games. Back then, the main task was to modernize the gameplay for recording ad creatives, and a little later the idea of creating playable ads appeared. Gradually, there were more and more tasks, requirements grew bigger, and our department evolved. At first, I shared my experience with newcomers, then I participated in organizing processes and later became a lead. Now I have a team of 15 people under my leadership.

Marketing Development at Azur Games is not only about developers but also technical artists. Tech Artists deal with the visuals of playable ads: they are responsible for the complete graphics configuration. It’s worth mentioning they work with both 2D and 3D. Technical artists can model the environment elements, make character rigging, find or make animations on their own, and correct colors. The main task here is to make playable ads as eye-catching as possible, given the limitation of advertising platforms by weight of 2–5 MB. Only then the project is handed over to programmers to implement the game logic directly.

This division appeared half a year ago when one of the developers wanted to progress in this direction. Not all programmers can create a nice picture: some are closer to working with the code and architecture of the game. Nevertheless, we give preference to specialists having experience with visuals: skills in Blender, Photoshop, and Illustrator will help you to fix and finish something on your own. As an example, we have a Unity developer who used to be a designer some time ago. The art base helps him make cool builds on his own, without the help of others. It relieves our tech artists a lot.

— What’s the difference between developers in marketing and a product team?

If we mean functionality, our work can be characterized by a variety of tasks and quick results. To compare, in midcore projects, a programmer writes their own part of the code from a large game project — such work can last more than one month or even a year. We work with ready-made builds: we can finish a simple task in one day and create a playable ad from scratch just in one working week.

Hundreds of projects go through our department, each with unique mechanics and visuals. By the way, I think it’s a great way to teach juniors how to work with the code: you look at the developer’s implementation and try to add your logic on top without breaking anything else. Such visual savviness quickly pumps the ability to understand someone else’s code and find errors in your own. That’s the main difference from hypercasual game developers: although they often release new products, they only work on their own projects.

Another feature: a developer in marketing should have artistic taste and great visual erudition. No matter how you look at it, marketing is all about high-quality and catchy visuals. It’s desirable to know the rules of composition and color theory at a basic level. Knowledge of shaders and the particle system is preferable too — you should understand what settings to apply in each case.

For example, you have a request for game modification. You should not just insert the model into a random place but think over the whole composition and scene settings to make everything look harmonious. You need to understand what they want from you, and be able to adjust something, quickly correct it.

No less important is working with model and code optimization. Great optimization isn’t so crucial for stores as for playable ads ’cause they represent a full-fledged game with an awesome picture and satisfying interaction with the gameplay.

We are very dependent on the speed at which the playable ad loads in the browser. Players watch ads on different devices. It’s essential for us to make playable ads display the same way either on the latest iPhone or the old Android device. The game must be launched in 5 seconds at the latest, otherwise many users will leave without even playing it. As I said earlier, the playable ad’s weight should be about 3 MB, or the advertising platform will just refuse to download a heavier file. That’s why our leads take all these points into account, compile huge documentation with detailed instructions and share their experience with the team.

— Is it possible to switch to game development after all?

I think yes, especially if a person has such a desire or feels “stuck” in their position.

We have many opportunities for growth: our department has a grading system tied to upgrading the employee’s technical competencies. There’s also a lead development track for those who aren’t afraid to take responsibility for a mini-team. Also, there’s an option to become a tech artist if you wish to focus entirely on visuals. We always come out for finding growth points for everyone.

If we have nothing else to offer, transfer to the product team can be another option. However, we haven’t had such cases for almost two years of the department’s existence. Even the opposite, the guys from other teams wanted to join us.

— Speaking of personal matters, how did you become a Unity developer?

When I was a bachelor, I wrote small scripts on Sharp, and then got into a small VR startup that digitized 3D rooms. But first I was given a test task in Unity — I never opened this engine at all back then. As a result, in a week I studied everything that was available online: documentation and Unity courses, videos on Youtube, and materials on forums. I was hired, and I worked there for a year and a half.

Later, I decided to dive into gamedev, so I applied for different studios. I tried not only as a developer but also as a game designer. As a result, I got a job as a Developer at Azur Games. Now I am the Head of Marketing Development: I set up processes and interactions between team members. And most importantly, I broadcast my vision of what the department should look like and make appropriate decisions for this.

— What’s the coolest part about your job right now?

Watching the progress. I do love to see how the guys gain experience from task to task, taking mistakes into account and learning from them. I’m really happy to see people enjoy their work and results. When the game’s creative ad modified by our team hits the top, the person responsible for the task just lights up with joy. “Yes, this feature is just a bombshell! I told you it would work!” At times like this, I feel so proud of my department.

— What would you advise a junior Unity developer?

The most important thing is to work on your skills and be able to present yourself. Build a portfolio — even of small pet-projects. This will help consolidate the acquired knowledge and demonstrate it when looking for a job. Remember, your cover letter is a repository on GitHub.

I would advise any novice developer to focus on three points:

Link copied
Back to blog
All Case StudiesGameDevNewsInterviews
Interviews