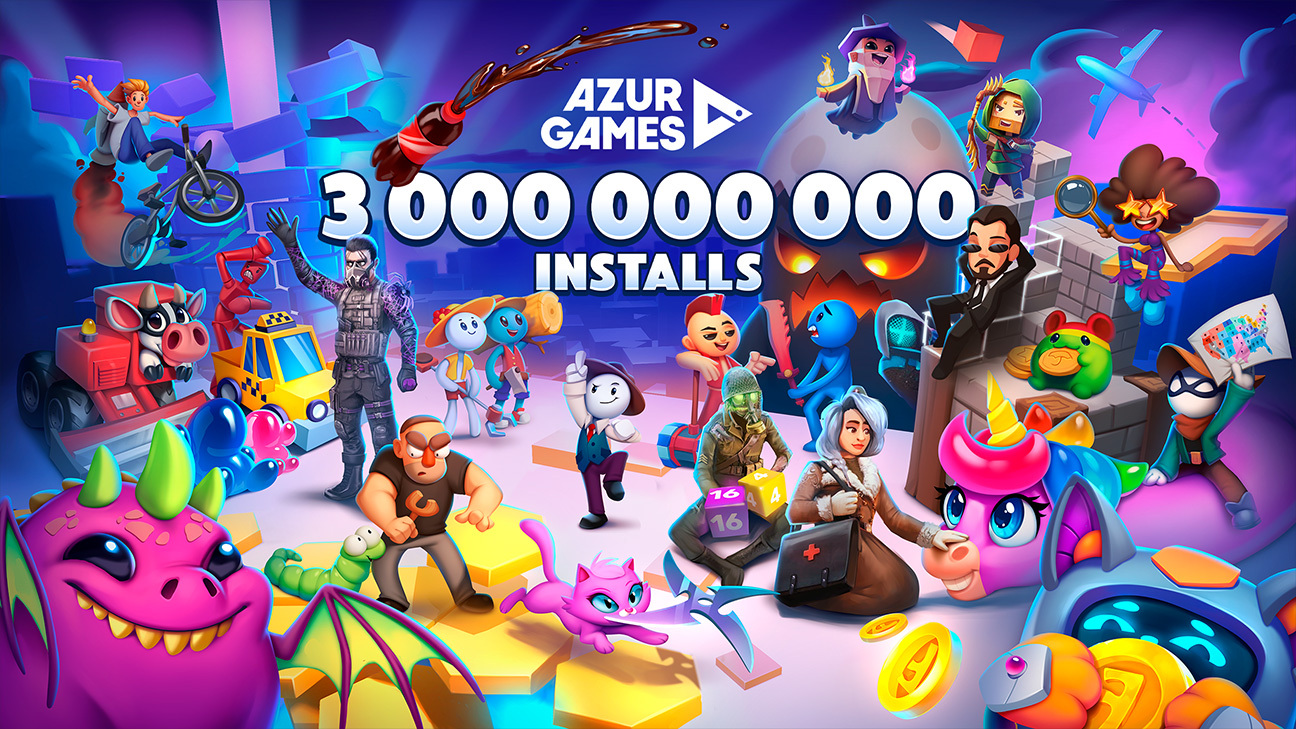 It’s been less than a year since we hit 2 billion downloads on our games, and now we have a new milestone.

3,000,000,000 downloads — Azur Games is spending the summer with this number in mind and there’s something to tell. The strategy we chose to go with from the very beginning has paid off and is very indicative of the current state of the market.

Don’t wait for a finished product

When the mobile game market (and hyper-casual games in particular) was in its infancy, developers were at a very disadvantageous position. Many large publishers didn’t help the studios grow and develop — they just expected finished free prototypes, tested them, and if they failed, they sent the build back without hesitation. That’s it. The developers were left with two choices, either figure out what’s wrong with the game by themselves, or start making a new one.

It’s not difficult to guess that a studio could cease to exist if it had to go through several of these iterations in a row. Then came the publishers who paid developers for each prototype, but Azur Games went further.

We became one of the first publishers that didn’t look for a ready-to-release hit, but actively helped developers. We gave feedback, shared analytics, and brought in our own specialists to improve the prototypes that other publishers had abandoned.

We’ve already talked about such cases and will share new ones in the future. For example: the story of Chain Cube, which was abandoned by the publisher due to low playtime, high CPI and low ratings. After several iterations with our producer, the project hit the tops and began to bring in $500,000 monthly.

Or the Sword Play case when the publisher suggested the changes that were completely incompatible with what the project actually needed and eventually terminated the partnership. We, on the contrary, rolled back all updates and after three weeks Sword Play was top 1 in the US on Google Play and the App Store for five days. And that’s without store features.

Azur Games has never chased a single hit game. The profit that a project can bring in the moment can’t be compared to what a partnership with a strong team can give you. Yes, it’s not certain that they will release a hit right away, but growing expertise and improving the quality from project to project basically guarantee you’ll reach joint success.

There’s a case that’s very illustrative of that rule — we made five Hidden Object games with the same studio to find the best combination of gameplay, visuals, meta and monetization.

Another example is the story of a two-person studio that had never made a hyper-casual game prior to partnering up with Azur Games. Now it’s a full-cycle team of 10 people with lots of experience in various fields. Together we’re launching the third successful project in a row with a constant growth in metrics.

All this led us to a new partnership model when the developer and the publisher understand that they work well for and with each other. After working with two to four prototypes by the pay-per-prototype (PPP) model, we offer to fully cover the monthly costs of the studio without any link to the number of prototypes they create. All we want is for developers to focus on quality instead of thinking about survival and the salaries of their employees. Yet, the choice is up to the partners.

When you work with studios based on the PPP model, only 1 out of 100 prototypes becomes a hit. At the same time, the chances of that happening are even lower if the project was developed independently. However, if we take experienced studios that focus on quality, our joint games become hits 10 times more often.

Our first investments many years ago basically went belly up. But it was a learning experience — had we not continued to experiment, to watch the market and trends, nothing would’ve happened globally. The team isn’t chasing short-term profit, we’re ready to invest and take risks.

Entering the hyper-casual market was also once an experiment for us. Initially, the team was engaged in mid-core projects (and we continue to develop in this direction very actively). But after trying their hand at this new segment, they saw that a couple of people can create a hyper-casual project with better metrics than a mid-core game made by a team of dozens of specialists.

Now we’re actively experimenting with blockchain-based games. Axes Metaverse has raised more than $4 million during the first pre-sales of chests that contained NFT characters, and recently launched a closed beta test for their holders.

We purposefully put this at the end, because the best is meant to be saved for later. If it weren’t for the people who work at Azur Games, we wouldn’t have the experience to share with developers, the ability to do marketing, our own analytics, or to come up with fresh ideas for experiments effectively.

It seems obvious, but in order to help partner studios grow, we have to constantly grow ourselves and strengthen the team. Now it’s more than 600 people, each of whom has contributed to the overall success of the company and its projects.

A few numbers to round this up

Top 3 of our games by installs of all time:

Cookie Carver was our most downloaded game in 2021 with 54 million installs.

Last year, Azur Games ranked 3rd in terms of downloads among game publishers and 7th among all mobile publishers in general.

What’s ahead? New games, new experiments and unpredictable changes in the market. And we’ll make sure to share our observations and results with you guys.